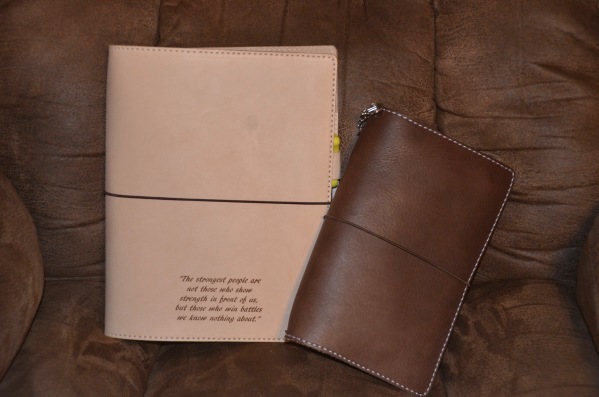 If you read yesterday’s post, you know that I’ve started a collection of traveler’s notebooks. This post is to explain what traveler’s notebooks actually are and why I love them so much since I’m sure some of you were going, “What the heck is that?” The picture above shows the two journals I currently own. They are both from Chic Sparrow. One is a Creme notebook in the color “dark chocolate” and the wide size, and the other is a Patina in the composition size. Still have no idea what I’m talking about? I’ll simplify it because I was confused too!

So what exactly is this thing called a “traveler’s notebook?”

Basically, a traveler’s notebook, (TN), is a piece of leather that folds in half and makes the shape of a notebook, or maybe a three-ring binder. It has between two and six elastic bands inside the spine, and one elastic band that comes out the back of the spine in a loop than is used to hold the notebook closed. The bands inside the spine are used to hold inserts, which can be notebooks, folders, zip pockets, or a mixture of everything. This is a picture of the inside of my notebook… 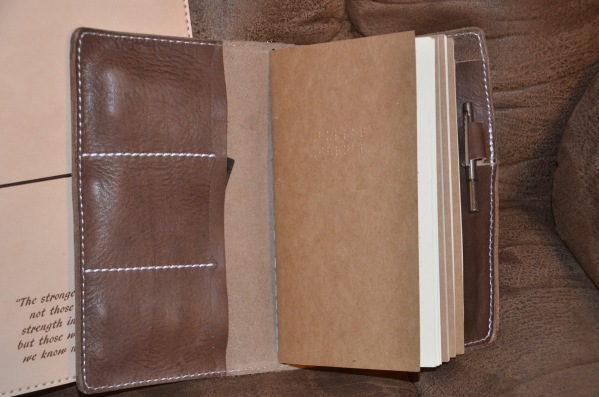 The notebook inserts are really nothing special. You know those composition books with the stitched binding that are pretty much just a bunch of pages folded together into a booklet and can be found pretty much anywhere? Any of those will work as long as they’re the right size for your cover! Chic Sparrow does have inserts, but you can literally go to Staples or Walmart or wherever and get books in the right size. The composition sized cover holds normal sized composition books, which is great for my purposes because braille is bigger, but it’s also really bulky and probably won’t leave my desk much. The cool thing about my composition size is that it came from the Patina collection, which means that I could get a quote burned into the leather! Here’s a closeup picture of the quote…

The wide size holds 5 by 8.25 inch inserts, and I have successfully crammed eight notebooks into my Creme with no overhang. It just took a little creative adjusting of bands and a couple paperclips!
If you’re not sure about what size you need, Chic Sparrow has a cool chart to help you out!

How did I even find out about these things?

Story time! I found out about traveler’s notebooks by scrolling through twitter! Another writer had tweeted about how amazing they were for writing journals, and at that point I didn’t have a clue what they were! So what did I do? I Googled! And my friend Google took me to youTube…
Now at first I was like, “Why on Earth would anyone want to watch a video of someone talking about a notebook?!” There were around 700 videos in the search results, and it was like I’d stumbled into this crazy cult of journal obsessed people! I really just wanted something simple to read that would tell me what the heck a traveler’s notebook even was and whether or not it’d actually work for me, but I started watching videos… And then I fell down the youTube rabbit hole, and before I knew it, I’d spent around three hours watching videos about notebooks… Mom and Dad got me my first notebook, (the wide Creme), for my birthday, and that’s when I finally got the obsession!

Why do I love my traveler’s notebooks?

I’m just gonna list things in no particular order:
•Carrying around a fancy leather journal just makes me feel like a fancy writer person!
•The leather smells SO amazing, and it just makes me want to write all the words!!!
•I have… a lot of spiral notebooks that are too scattered to count started right now, and every single one of them has something different in it… With a traveler’s notebook, I can sort of condense that collection so it doesn’t take over. I currently have my idea journal, blogging notebook, book review notes, and bullet journal in the wide Creme, and all of the research/outline/scribbled notes for my current work and progress are stored in the composition Patina. That still leaves me with a separate notebook for notes on all the writing books I’ve read, python code, HTML code, screen reader work arounds, random tech keystrokes and notes, notes on all the workshops and webinars I’ve attended this year on various topics, my school planner, and probably a couple I forgot… I did order three more traveler’s notebooks because there was a major cyber Monday discount, so hopefully I can transfer all those over.
•You can put charms on traveler’s notebooks, and they make pretty jingly noises, and it makes me very happy!!!
•Every leather cover is going to be slightly different from the last, (even if you do get two from the same collection), so I can easily tell what notebook I’m grabbing by the size and texture without having to look at labels and such. You’d be surprised at how many times I’ve left the house with the wrong spiral notebook because I didn’t read the label, and then wondered why I had writing notes in my python notebook.
•They just seem so… rugged. It’s like something a character would find in a story or pass down through generations!

What do you think?

BTW… It kinda looks like I might be associated with Chic Sparrow because of all the links, but I’m not. I just chose them for my first notebook because they had really good reviews on youTube, and their website was the only one that actually wanted to play nice with a screen reader. If you search for traveler’s notebooks on the inter web, you can find a bunch of different companies. I do suggest that you check out youtube first though, because all leather feels different, and you probably wanna figure out what kind you want before you spend the money! My Creme is super soft and floppy and molds right around all my inserts, but my Patina is a lot stiffer and has more of a book structure.

I'll love you forever if you share my stuff!

One thought on “Introduction to Traveler’s Notebooks”

Send Me An Owl Cancel reply

See All My Random Tweets!