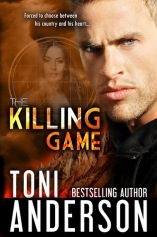 Wildlife biologist Axelle Dehn isn’t about to let anyone harm her endangered snow leopards—not the poacher intent on killing them, nor the soldier who wants to use them as bait. But Axelle is unknowingly entangled in a conflict that stretches back three decades, a conflict that could spark a war between two of the world’s great nations.

British SAS soldier, Ty Dempsey, is on a mission to hunt down an infamous Russian terrorist in a remote region of Afghanistan. Dempsey hasn’t failed a mission yet, but when Axelle is kidnapped by the Russian, he is forced to choose between duty and his heart. He risks everything to save the determined, prickly woman he’s fallen for, but in doing so sparks a deadly series of events that threaten to expose the most successful spy in history. A spy who will destroy anyone who gets in his way.

Remember that “blind date with a book” challenge I took a while ago? Yeah… This is the book I got.
Let me begin by saying that I really do not like reviewing books I don’t finish. I want to be a published author in the hopefully near future, and I wouldn’t want someone publicly judging my book when they didn’t read it all. I try to do authors the same courtesy that I would like them to give me by just never speaking of books that I don’t enjoy, but since this was part of a challenge that I just kind of dropped, I thought I’d go ahead and review it on here so you’d know how that ended up. However, I will not be posting my rating on Goodreads or Amazon like I normally would because I don’t want my two star rating to factor into the average over there. This rating is based on the first sixty pages, and should therefore be taken with a grain of salt! But complicated ramble aside, here’s what I thought:
I knew this book wasn’t in my preferred genre when I picked it up, but I started it with an open mind because I’ve really enjoyed other genres the few times I’ve branched out. If I can connect with a character or theme, I can almost always find something to like about the book. But unfortunately that didn’t happen with The Killing Game…

The Writing
The writing style was very choppy, and it made it reeeeeeeally hard to get into the story! Here’s a snippet of the notes I started taking for this review just to give you a taste:
•Ok… I get it… It’s cold.
•Yeah… Harsh landscape… Got it!
•Wait a second! There are two “D” names, and idk who’s who anymore!
•AWWWWWWW! Leopard cubs!
•How long are we going to drag this out can we please either capture the guy or let him go or kill him already?!

Looking back at those notes, they seem kinda harsh, which is exactly why I hate writing DNF reviews! Again, take this with a grain of salt, but the writing was just very hard for me to read. I kept getting confused at who was talking because there were… I think three POV characters that I saw??? And I kind of had a hard time transitioning between them because I didn’t connect with any of them. Which leads to my next point…

I know I didn’t get far enough to really see any character growth, but every single character seemed very flat to me. It was all “telling,” not “showing.” Everything was directly stated, and there was no subtext for the reader to fill in the blanks.

I think the plot is probably the best thing this book has going for it. If the writing had flowed a little easier, and there wasn’t so much description of cold weather and rough landscapes, I would’ve probably finished it just to see what happened.

Please ignore everything I’ve said here and give this book a chance if you’re interested in this genre. It could very well be that romantic suspense or whatever on earth this thing is just is not my cup O tea! For all I know, suspense books are supposed to have choppy writing and cardboard characters! If you read this kind of thing regularly, please enlighten me on the writing style and characters of a typical book in the genre because now my writerly nerd side wants to know…

Have you read The Killing Game? Did you finish it? What are your thoughts on DNF reviews? Have you ever written one? Would you consider writing one? Under what conditions if any would you write one? Let’s chat in comments!

I'll love you forever if you share my stuff!

Send Me An Owl Cancel reply

See All My Random Tweets!